A new take on the Scandinavian
crime genre!

Marius Tokle, a well educated young man of 25, born and living in Oslo, Norway.
A senseless tragedy in his youth has made him into a man with a somewhat skewed moral
compass. Society owes him, although he is neither bitter, nor vindictive by nature.
Just a pragmatist on life’s journey.

A shady deal gone wrong, Marius is on the run, and then by chance he witnesses a murder.
But the culprits have no idea he is there. Marius uses the situation to his advantage,
and his life changes forever, in more ways than one.

Sound of a Murder is a story of a young man, his choices and their consequences. It is a
story of misplaced ingenuity, of how money corrupts and how life events shape who we
become. The characters are defined by their actions, the dialogue sharp, and the
twists many and unexpected.

Oslo is often described as a big small town, everyone seems somehow connected, and old
school ties run deep. But Norwegians are also famously reserved, in stark contrast to
a transparency of personal records unthinkable in most other countries, to the benefit
of authorities and criminals alike. This dichotomy adds colour and substance to a story
that smoulders and burns, unexpected developments push the readers imagination, but
remain on the right side of plausibility.

Sound of a Murder is a real page-turner that will keep you guessing until the very last page. 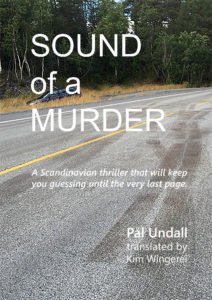 Click here for all "Sound of a Murder" purchase options!